Hers will be the first statue of an actual Arizona woman on the Capitol Mall. The location of the statue will ensure that many of the 82,000 Arizona residents, school children, and tourists who visit the Plaza each year will become more aware of this important piece of Arizona’s History. 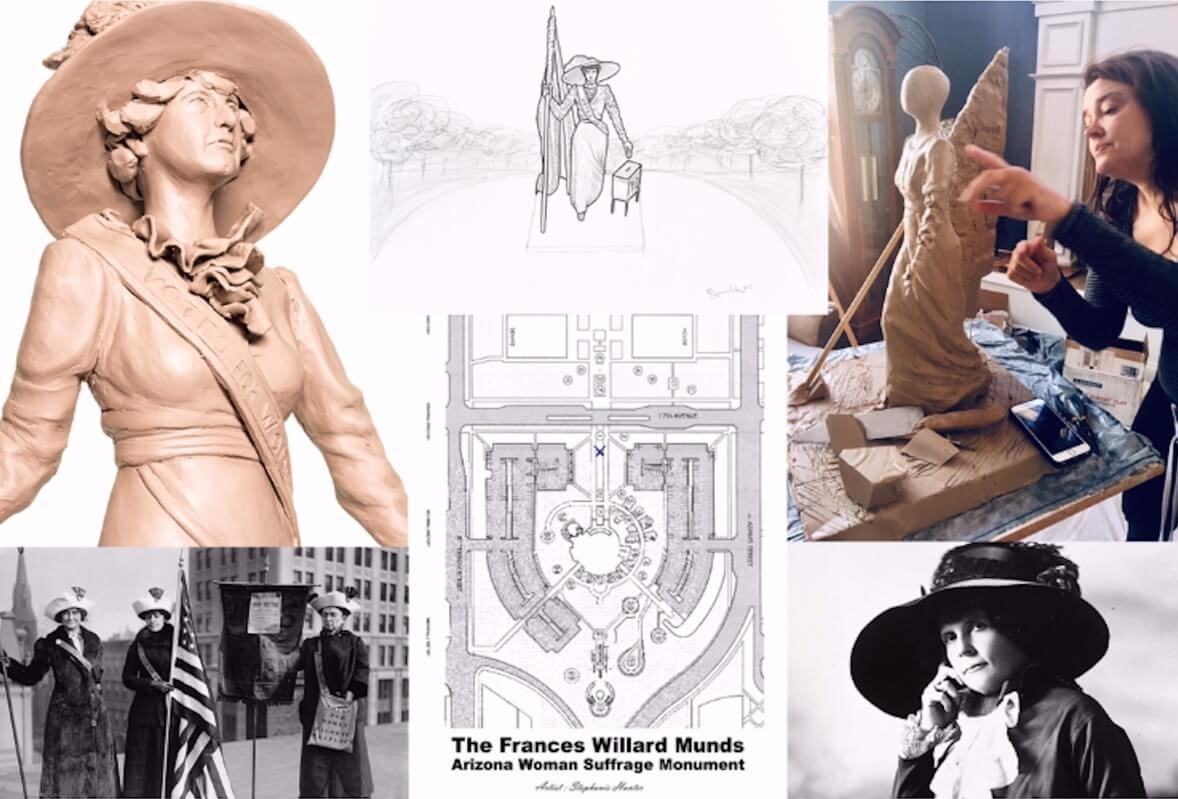 “I’m truly honored to be selected to sculpt this monumental statue of Frances Willard Munds for the Arizona Women’s History Alliance and the people of Arizona,” Hunter said. “As a female sculptor, as well as a mother and military wife, it is humbling to think about the opportunity and legacy that has been given to me.”

In describing the statue design, Hunter said it tells a story that connects Frances Munds to the work of Arizona suffragists who came before her, reflects the incredible work she accomplished and finally, suggests the future of Arizona women who did not stop once they got the vote, but moved forward, ran for office and used their votes to change the society they lived in. When completed, the six-foot-tall, bronze statue will be detailed to Frances’ likeness and will embody her energy, her intelligence, her graciousness and her abilities. “I am passionate about creating the individual details that make a sculpture come alive and am looking forward to including those details on the full-size statue,” Hunter added.

GET INVOLVED IN ARIZONA WOMEN'S HISTORY

We use cookies on our website to give you the most relevant experience by tracking engagement on our page resources. By clicking “Accept”, you consent to the use of ALL the cookies.
Cookie settingsACCEPT
Manage consent

This website uses cookies to improve your experience while you navigate through the website. Out of these, the cookies that are categorized as necessary are stored on your browser as they are essential for the working of basic functionalities of the website. We also use third-party cookies that help us analyze and understand how you use this website. These cookies will be stored in your browser only with your consent. You also have the option to opt-out of these cookies. But opting out of some of these cookies may affect your browsing experience.
Necessary Always Enabled
Necessary cookies are absolutely essential for the website to function properly. This category only includes cookies that ensures basic functionalities and security features of the website. These cookies do not store any personal information. The cookies we use are to track your cookies preferences and to control popups for our newsletter.
Non-necessary
Any cookies that may not be particularly necessary for the website to function and is used specifically to collect user personal data via analytics, ads, other embedded contents are termed as non-necessary cookies. It is mandatory to procure user consent prior to running these cookies on your website. Cookies we use: Google Analytics
SAVE & ACCEPT